FROM NUREMBERG TO THE BEACHES OF NORMANDY, TAKE AN UNPARALLELED PLUNGE INTO WORLD WAR II HISTORY

FROM NUREMBERG TO THE BEACHES OF NORMANDY, TAKE AN UNPARALLELED PLUNGE INTO WORLD WAR II HISTORY 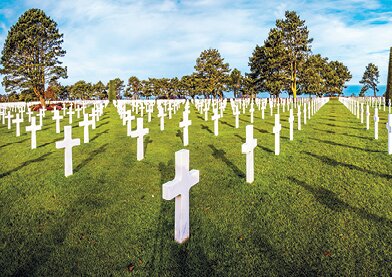 Have you ever wished to travel to Europe, but with a specific purpose in mind? If you’re inspired by history, particularly that of World War II, Image Tours' World War II Memorial Tour may just be your golden ticket.

In 16 days, you will cover a total of six countries. You will be fully immersed in the poignant history of the Second World War. This is your chance to discover some of the most essential aspects of the war while still taking time to marvel at the surrounding landscapes and enjoy the culinary delights of Europe.  Let’s zoom in on some of the historical and cultural highlights of the tour:

SEE WHERE IT ALL BEGAN ... AND WHERE IT ENDED

Your tour begins with an impactful visit of Nuremberg, the ideological capital of the Nazi Party. This prominent German city is famously known as the site of the Nuremberg Rallies. You will have the chance to explore the Rally Grounds, the Congress Hall and finally, the Palace of Justice where Nazi Party members were put on trial for their heinous war crimes.

But it’s not enough to merely concentrate on the culmination and destruction of the Nazi Party, which is why a visit to Dachau Concentration Camp is included in your tour. This was the very first concentration camp erected by Nazi Germany. Liberated by U.S. forces in April of 1945, the camp was then used to detain SS soldiers awaiting trial. These visits to Nuremberg and Dachau pack an emotional punch. You can be certain to add them to your list of unforgettable travel experiences.

A SUBTERRANEAN EXPERIENCE AT FORT HACKENBERG

Later on in the tour, you will discover the subterranean side of World War II at Fort Hackenberg. Located in France’s Lorraine region near the border of Germany, Fort Hackenberg — the largest of the Maginot Line fortifications—is an immense underground fort constructed by the French after WWI to defend future German invasion. Its subterranean galleries span over 10 kilometers and are accessible by mini rail. A guided tour provides visual insight into the history and structure of the fort, including a one-mile train ride to the operational Gun Turret at Block 9. At Block 8, you will hear an explanation of how the fort came under German occupancy and the Americans, led by Patton, regained control in November 1944.

THE SHORES OF NORMANDY: MORE THAN JUST A TRIP TO THE BEACH

Another highlight of your tour involves a trip to the Normandy Landing Beaches. Site of the largest seaborne invasion in history, D-Day marked a major turning point in the war and set the stage for Allied victory. A vast, open expanse of gray-blue coastline, the Omaha and Utah Beaches and the Arromanches will take you back in time to the events that left permanent footprints in the sand.

What is a European trip without time for relaxation and contemplation? During your tour, you will get to enjoy boat cruises along the Rhine River as well as Amsterdam’s famous canals. These scenic cruises will allow you to soak in some of the most enchanting landscapes, riverside town waterfronts, and architecture in all of Europe.

As you enjoy the passing scenery, you may find yourself daydreaming about all of your experiences so far, and imagining what the next few days will have in store…

What better way to wind down your tour than in the ville de l’amour? Create lasting memories on the streets of Montmartre, where you will spend one of the final nights of your tour. The winding, cobbled streets of the 18th arrondissement will tease your artistic senses. Climb to the summit and explore the Sacré Cœur Basilica and take in the view from above. Then make the descent into the heart of this Bohemian paradise, where the likes of Van Gogh, Monet and Jean Cocteau once resided. You may wish to get your portrait drawn by a local caricature artist. At the end of the day, indulge in classic French cuisine at an outdoor bistrot. And don’t forget to sip on a wine from Clos de Montmartre, Montmartre’s very own vineyard!

Check out the tour itinerary and more at https://www.imagetours.com/tour/world_war_ii_memorial

THANK YOU TO OUR VETERANS!